November 2012 we happened to have our first exposition. It was very exciting!
We were kindly asked to exhibit our embroidery with Russian twist in Nansen Environmental and Remote Sensing Center, Bergen.
NERSC was celebrating the 20th anniversary of the affiliated Nansen-Center in St.Petersburg, thus the Day was dedicated to Russia.

We exposed 2 costume illustrations with short desciptions or European Blackwork and Russian folk embroidery and 9 embroideries.
In the future we plan to expose more of our work, when there will be on restriction on the theme.


Posted by Catherine of Russian Blackwork at 15:17 5 comments: 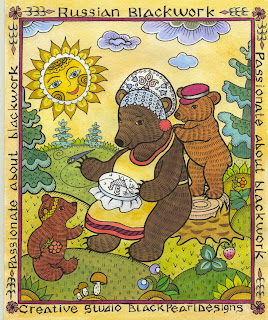 Posted by Catherine of Russian Blackwork at 19:31 No comments:

I fanally finished the tird part of our Christmas tryptich "Holy night" - Magi with gifts! 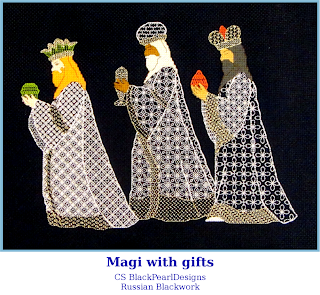 We did these series in summer 2011 and then started to stitch the models, but it took quite a long time to complete all the three parts. 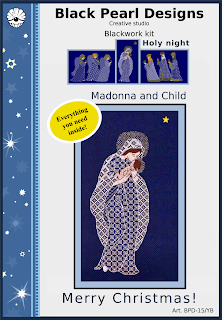 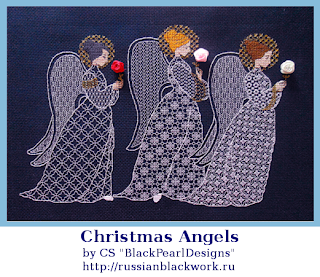 Now as they are finished I'll proceed the pictures and all the necesary information and will staff the kits soon. So hopefully in the second half of November the whole collection will be available at our Etsy shop.
Posted by Catherine of Russian Blackwork at 14:57 No comments:

Yesterday I got pictures of the finished Vernicle.
I dont have words to express my feelings...
I just gaze at it with admiration and piety...
(hard to belive now that the pattern was worked by me 2 years ago)
Enjoy:

Posted by Catherine of Russian Blackwork at 15:25 No comments:


Samovar is a part of life and destiny of Russian people, one of the well-known symbols of Old-time Russia. 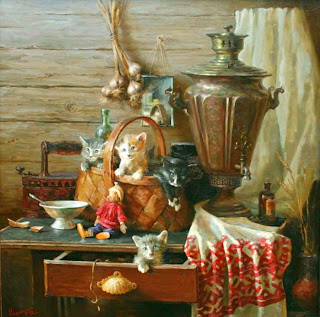 Samovar is reflected in Russian proverbs and sayings, in works of Russian classic writers and artists.
And of course, working on our collecton "Russian spirit" we could not pass by this famous Russian item! 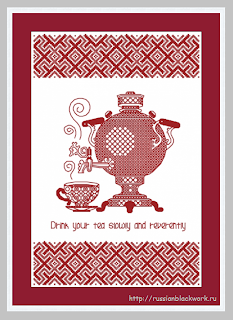 Though, originally samovars were made of metalls, to my mind to suit the idea of Russian Blackwork, it should be crimson when talk about embroidery.
What do you think of it?

I've spent a whole day yesterday working on the cover for our new design "Sudarushka".


Here is the version that I accept more or less. 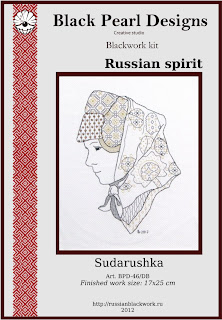 And a humorous picture from my friend about Russian Blackwork, featuring again traditional Russian headwear kokoshnik ;)
This illstration is worked out in a specific style called lubok. It is a traditional Russian popular print, characterized by simple graphics and narratives derived from literature, religious stories and popular tales. Lubok prints were used as decoration in houses and inns in 17-19 centuries.
Posted by Catherine of Russian Blackwork at 14:21 No comments:

This week I almost finished one of our old designs inspired by the ancient Russian headwears. It features a young lovely woman in a luxeriousely embroided headwear called "povoinik" and a shawl over it.
I decided to call this work "Sudarushka" - it is an out-of-date Russian word meaning a kindly address to a young beautiful woman. 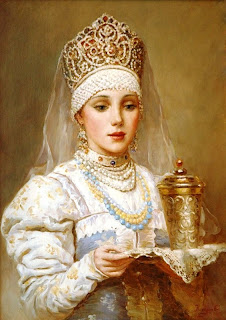 Let's have a look at the fascinating ancient Russian headwears. It is really a good and endless source of designer's inspiration! And before this small exursion I want to tell a bit about such types of old-time woman’s hewarwear as Povoinik, Kichka, Soroka and, of course, Kokoshnik.

Kichka is a headgear imitating cow’s horns and thus it symbolized the woman’s fertility. The horned kichka was worn by young married women and changed it into the hornless one when woman became old. It was mainly used in the Southern provinces (Tula, Ryazan, Kaluga, Oryol, etc.) of Russia. The kichka covered the hair and had a firm part in front above the face, with a piece of bark or a plank inserted, forming horns, a blade or a hoof. The kichka was put on the head, the hair thoroughly covered with cloth, and then the cloth was fixed on the head by way of rounding the hoofs several times with a lace. At the back of the kichka they used to put on a beaded right-angled stripe of velvet, fastened on cardboard for firmness.


The first written record of kichka refers to 1328. In the early 20th century this complex headgear was almost everywhere replaced by the povoinik, or the kerchief (headsquare). In the Voronezh Region, however, the kichka remained as a wedding garment till the 1950s.
Soroka was the name of the trimmed outer part of kichka-type headwear, its shape usually connected with the shape of a kichka. The soroka was made of fabric and, being stretched over the kichka, sometimes might hide its horns. Any peasant woman could sew it.
Kokoshnik is a folk headgear widely known thanks to Russian folk tales. The history of kokoshnik is full of enigmas and mysteries, and nobody knows when exactly it came to existence.
It is only known that orders of Peter the Great put an interdict on wearing kokoshnik by boyar ladies. Yet, the headwear survived in peasant and merchant milieu (mainly in the Northern provinces) as an attribute of festive or wedding dress, whereas in the late 18th century Catherine the Great allowed it only as an element of a carnival dress.
Unlike the everyday headwear such as soroka or kerchief, it was at first exclusively festive and was richly decorated with pearls, especially in the North. Only married women used to wear kichka and soroka, whereas kokoshnik was worn by unmarried maids as well.
Kokoshnik looks like a roundish shield around the head. The name “kokoshnik” comes from the Old Slavic “kokosh” that meant a hen or a cock. The main feature of the kokoshnik is a sort of a crest rising above the forehead. Its shape varied from province to province. It was a light fan of thick solid paper stitched to a cap with a ribbon running down behind. Kokoshniks were trimmed with brocade, galoons, beads, pearls and, the richest ones, with gems. 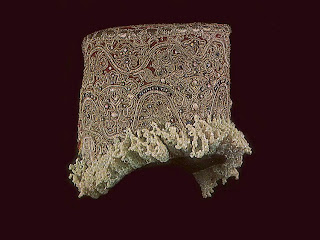 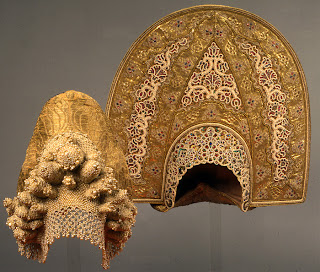 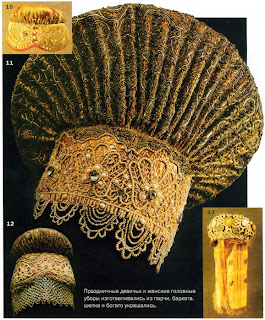 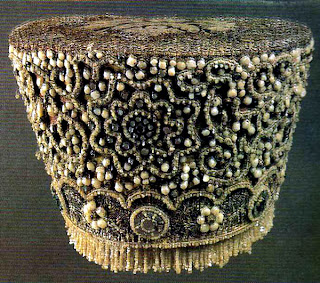 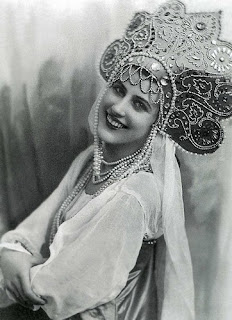 If you feel like, you can find more information about ancient Russian female headwear here Traditional Women’s Headwear.

Posted by Catherine of Russian Blackwork at 18:51 No comments: